“Why I’m voting for Trump:” a considered response.

But this is what he does.  He flips off everyone who tries to rein him in.  Nobody is going to tell him what to do.  He promises one thing and does the exact opposite.  He clearly enjoys the chaos, divisions and despair he generates.  His extreme willfulness is a sign of his evil.  The truly evil are always like that; they will not tolerate any restraints on their behavior, and woe to the person who tries to restrain them in any way or tell them what to do. They may promise to change or to comply, but they won’t; and they will always get even later.

The Americans who say they don’t care if Putin and Russia interfered in their election just as long as Hilary Clinton wasn’t elected, the Americans who think ghost guns are a wonderful idea and Donald Trump is a great president, they are like the real walking dead.  The zombie apocalypse is already happening in America.  It’s terrifying to watch. 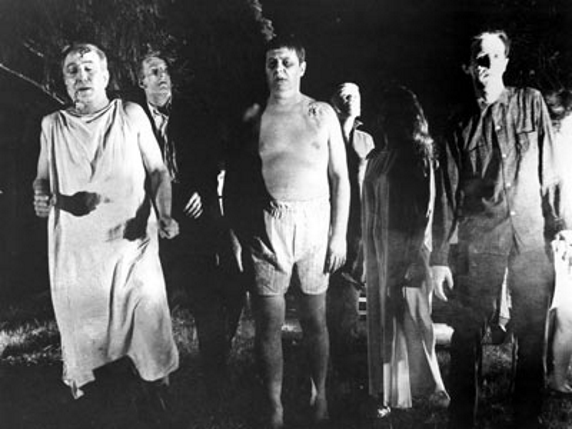 “Night of the Living Dead established most of the tropes associated with the genre, including the unintelligent but relentless behavior of zombies.” Brian Cronin

May 12, 2017:  “”If you’ve seen [James Comey] under sworn testimony, he just doesn’t comment on things he’s not supposed to. He knows the ropes.”  http://www.cbc.ca/news/world/trump-fbi-skeptics-james-comey-investigation-1.4111522   Really??  Has the FBI forgotten so soon how James Comey skewed the last U.S. presidential election?  https://www.fbi.gov/news/pressrel/press-releases/statement-by-fbi-director-james-b-comey-on-the-investigation-of-secretary-hillary-clinton2019s-use-of-a-personal-e-mail-system   And, isn’t blabbing about investigations one of the prime reasons that the federal Office of the Attorney General  has just recommended that he be fired? http://time.com/4773246/james-comey-fired-justice-department-hillary-clinton-email-rod-rosenstein/  I think it’s clear the FBI is gunning for Donald Trump, and, while I think it ‘couldn’t happen to a better guy,’ I disapprove of their using lies and the short memories of the American citizens to do it. February 23, 2017:  Stop the Presses!  Donald Trump makes a good point:  “China has total control over North Korea… and China should solve that problem.  And if they don’t solve that problem, we should make trade very difficult for China.”  http://www.bbc.com/news/world-asia-39067908

Of course, one might say the same about the Republicans and Trump.

November 13, 2016:  This here article by Page Six:  http://pagesix.com/2016/11/12/why-celebrity-endorsements-didnt-help-hillary-at-all/ is a thoughtful assessment of some of the reasons where the Democrats failed in the U.S. presidential election, while blandly overlooking even more important reasons, such as the FBI Director’s last-minute and game-changing innuendo and the Democratic party chairman’s sabotage of Bernie Saunders’ campaign.   But I think nobody has yet elucidated the single most important reason for Donald Trumps success, and that is:  his hat trick of appearing to many angry Americans who felt they’d been lied to and ignored by government, that he was telling ‘truths’ for the first time in politics – despite the fact that a lie popped outta his mouth pretty much every time he opened it, and his own history shows he doesn’t give a rat’s tushy about the poor, the female half of the human race, immigrants, or human rights in general.

However, I had an insight this morning into who is most likely to assassinate Donald Trump:  not ISIS; ISIS is perfectly happy with a Trump presidency, because he’s an awesome propaganda asset for them just by being there.  No, it will be one of his own supporters, when he doesn’t follow through on his craziest campaign promises, like the wall.  If he did start to look like a serious threat to national security, someone in the government would get him, but I’m thinking now he’s not going to do that.  So it will be a ‘supporter,’ someone who can get in close to him by telling him they voted for him, and it will be when some angry white guy with a gun finally realizes that Trump is not going to actually make good on his more outlandish campaign promises.  I do think it’s quite likely that someone will try to kill him at some point.  I’ve seen a lot of U.S. presidents come and go in my 58 years, and I’ve never seen one coming in with so much hate shadowing him, before he even gets into office.

The real elephant in the room is the word ‘evil…’ People have called Donald Trump a lot of names lately, for his remarks on torture: ‘I like it a lot,” on women, ‘they’ll let you do anything if you’re a star, grab ’em by the pussy,’ on Mexico, ‘they’re deliberately sending rapists and murderers to the U.S.’ but nobody uses the word ‘evil.’ Consider this, the meanings of the Hebrew word ‘satan’ are ‘slanderer, adversary.’ Jesus called Satan ‘the father of lies… not holding to the truth for there is no truth in him.’ [John 8:44] Whatever religious or philosophical maps we adhere to, we must surely accept that without truth they are nothing, without truth We are nothing, and therefore, whosoever willfully attacks what is true as a matter of course and as a pattern of behavior may be said to be Inimical to ‘God’ in whatever form you understand ‘God’ to be. Donald Trump is evil. Let us call a spade a bloody spade…

One of the phrases most often applied to Trump by his supporters is “refreshingly honest.” Repeatedly battering Hillary Clinton over her use of a private server for government emails, he invited Russia to hack the rest of her email correspondence.  Later, he claimed his remarks had been taken out of context, when that failed, he claimed he was joking.  But there’s video of those remarks, which you can still see and judge for yourself if he looks to you like he was joking:  https://www.theguardian.com/us-news/2016/jul/27/donald-trump-russia-hillary-clinton-emails-dnc-hack  (I often use the British Guardian in references to news stories, or the Canadian CBC, because they’re still free to read, with no monthly limit as to how many articles you can read.)

Trump supporters just love that “Make America Great Again” slogan.  In the first Presidential debate, however, Donald Trump did not deny that he “was one of the people who rooted for the housing crisis” or that he had said, back in 2006, “Gee, I hope it does collapse, because then I can go in and buy and make some money.”  Trump’s response in the debate?  “That’s called business, by the way.” https://www.washingtonpost.com/news/the-fix/wp/2016/09/26/the-first-trump-clinton-presidential-debate-transcript-annotated/

In that debate, he claimed that deregulation and cutting taxes for the rich were the keys to “bringing back jobs” to America.  One of the causes of the economic meltdown in the United States in 2007 – 2008 was the lax regulation over banks and savings and loans institutions:  https://en.wikipedia.org/wiki/Financial_crisis_of_2007%E2%80%9308#Deregulation  a disaster presided over by Republicans.

As for his claim that his tax cut will be the “biggest since Ronald Reagan,”  that’s kind of a low standard, since “According to historian and domestic policy adviser Bruce Bartlett, Reagan’s tax increases over the course of his presidency took back half of [Reagan’s original] 1981 tax cut.”  Trump is beating the drum of Ronald Reagan’s “trickle down economics,”  “the belief that tax policies that benefit the wealthy will create a “trickle-down” effect to the poor.”  https://en.wikipedia.org/wiki/Ronald_Reagan#.22Reaganomics.22_and_the_economy  But, Reagan ended up taking back half the tax cut he’d promised, and the poor certainly didn’t benefit in the long run:  “Reagan’s economic regimen included freezing the minimum wage at $3.35 an hour, slashing federal assistance to local governments by 60%, cutting the budget for public housing and Section 8 rent subsidies in half, and eliminating the antipoverty Community Development Block Grant program.”

In newly released video from a court deposition, Donald Trump has evidently stated that his infamous claim that Mexico was “deliberately sending rapists into the United States” was a statement that had been “planned in advance,” and, that he “didn’t think the statement would hurt his brand.”  https://www.theguardian.com/us-news/2016/sep/30/trump-comments-mexico-rapists-planned-deposition-video  That’s your “refreshingly honest”??  Even many hard-core Republicans don’t think so anymore:  http://globalnews.ca/news/2969029/citing-trumps-deep-character-flaws-republican-newspaper-endorses-clinton-in-historic-move/

In fact, Donald Trump plays fast and loose with the truth all the time.  Don’t his supporters read the news?  Nobody’s hiding the truth from them.  When I read that Trump supporters believe that he’s a good guy who doesn’t really mean the crazy things he says, I’m reminded of victims of abuse who go back to their abuser, telling themselves, ‘he didn’t really mean it,’ ‘he does really love me.’  They actually have a lot more in common with ISIS supporters than they think:  ISIS supporters take one or two paragraphs from the Quran and ignore the rest, ignore all the parts about obeying the laws of the land, not killing people who aren’t trying to kill you, the part about Christians being closest to God, and how the people of the book (Christians), the Jews and the pagans who do good and try to lead righteous lives “shall get their reward from their Lord and they shall have no fear, nor shall they grieve.”  (Yeah, it’s all there in the Quran; I have five different translations in English, and I’ve read the Quran all the way through three times.)  But ISIS takes one or two chapters and creates a violent ideology based on that.  Similar to ISIS strategy, Trump supporters take one or two claims that their candidate has trumpeted over and over, and they just tune out the rest.  Nor are they as far away from violence as they think:  they’d be just fine with a President who would “shoot boats out of the water” for making rude gestures:  http://www.cnn.com/2016/09/09/politics/donald-trump-iran/  A promise I’d bet money ISIS terrorists would applaud if it was one of their own making it.   The only way you don’t see Donald Trump’s actions as major red flags is if you live in that terrifying place we all go to sometimes: