Geeks on the Way, a cautionary note

Oh wow, no new blogs from me for weeks and now two in one day, eh?  Well, I don’t normally yelp online about products, services and so forth, but I’ve just now noticed that a computer company I’m none too pleased with is also a lot bigger than I’d thought:  http://www.geeksontheway.com/welcome.html   It so happens that the majority of my readers are either American or Canadian-based, as is Geeks on the Way, evidently.

Two years ago in June 2012, they built a computer for me and installed it.  Two weeks ago, it had a meltdown.  The manager of Data Path Support Group Inc., Lewis Chan, who came out to fix what I thought was a broken fan, informed me that in fact the fan had never been hooked up.  Well, not the large fan in the processor, at any rate.  One small one was running.  As he said in the note he wrote for me:  “Observation on a custom built PC, at [XXXX] street

There was a problem with this computer initially with the CPU cooler overheating and being all clotted up with dust. Being a CPU manufactured by AMD, it tends to overheat, and probably have shortened the life of the CPU.

This could be avoided if the case fans were all functioning when it was built. The problem being one of the case fan was not even connected and powered on. I suspect that the overheating problem could have been addressed better when the system was built!

On May 14, I sent an email to ol’ Geeks on the Way:  “Two years ago, on June 05, 2012, Geeks on the way installed a computer that had been custom-built for me by the same.  As I found out last week, the big fan in the processor had never been installed, which, according to Lewis Chan, manager of Data Support (Edmonton), “probably shortened the life of the CPU.”  Now, I’ve just spent several days and a thousand dollars to fix the problem.  First, a fan hook-up, and then, when it was clear it was too late to save the processor, a new processor.  I don’t expect a total refund for the computer you built, which appeared to be working well for almost two years.  But the fact is, I certainly would never have purchased a computer from you people had I known it was going to have a melt-down just shy of two years later.  I expect you to compensate me in part, however, for the money I’ve spent, in consideration of the negligence involved in not hooking up the fan.  I have receipts and the note from Lewis.

I look forward to hearing back from you really promptly.”

I finally  hear back from someone who identified himself only as “James, Customer Services Manager,” today at 15:25, from the number:  780-483-2162.  He tells me that if the fan had not been hooked up, the computer would not have lasted even as long as it did.  “I see,’ says I, ‘so you’re saying that either Mr. Chan is a liar or I am, is that it?”  “No, not at all,’ he replies, and, this is the hilarious part, because I’m sure he meant to use the word ‘responsible’ when he went on to say, ‘I see there’s a one-year warranty on the computer, which has expired, and we’re not reliable [sic] in that perspective.” 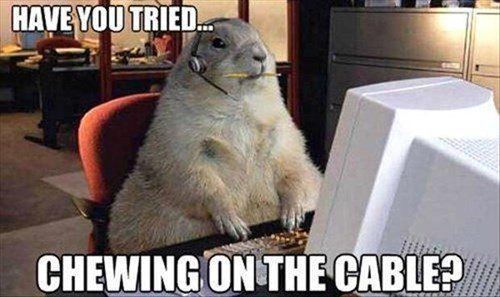 I'm not here much at the moment. You can visit my web-sites to learn more about me. https://marnietunay2.wordpress.com/
View all posts by Marnie Tunay →
This entry was posted in Uncategorized and tagged Alberta, computer, Edmonton, Geeks, on, repair, review, reviews, service, the, Way. Bookmark the permalink.