the Court states:  “[18]   The Commission concluded (reasons, paras. 453-5) that the charges against the appellants had to be proven on a balance of probabilities, based on clear, convincing and cogent evidence. The Commission set this high standard with good reason, because as the Commission has recognized, a finding of a breach of the Act can have a severe impact on the careers of those involved, and can result in significant penalties.”

That’s really interesting, because, one of those judges in the Alberta Securities Commission case, the Honourable Mr. Justice Peter Martin, wrote the dissenting opinion for Dalla Lana, and in that dissenting opinion, he agrees with the lower standard of proof set by the University in what amounts to a violent sexual assault charge, stating in paragraph 46 of Dalla Lana:  “[46] I have read the reasons for judgment of my colleagues, and I agree with their proposed disposition of all of the grounds of appeal, except the last. In my opinion, the Board’s refusal to  hear Dr. Collins’ evidence, then admitting and appearing to rely on the evidence of Dr. Cave, was  fundamentally unfair and I would allow the appeal on that basis….”  [Justice Martin’s name appears first on the Alberta Securities Case memorandum of judgment, and it’s likely, IMO, that he wrote that one, too.]

Oh, sure, a finding of insider trading can “severely impact” a career, but a finding of “sexual assault of a violent nature” isn’t going to hurt it any… Funny, how, when the shoe’s on the other foot, namely, on that of the guy with the biggest pockets in the court case, then the evidentiary rules seem to change…… 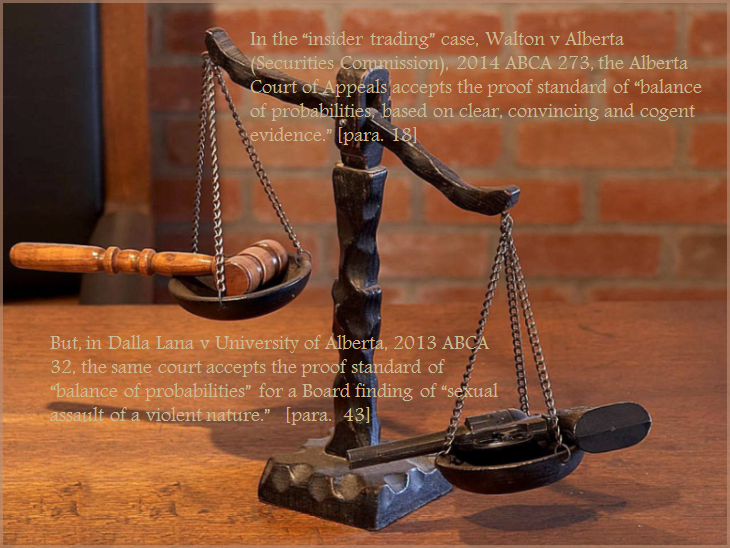 December 05, 2014:  And this:  http://www.breitbart.com/Big-Hollywood/2014/12/03/investigation-lena-dunhams-republican-rapist-story-falls-apart-under-scrutiny   is why allegations of sexual assault should never be held to a civil stand-ard of evidence.   Because some people are capable of making false accusations, even if someone else’s life is ruined as a result.  You’d think a high-court judge wouldn’t have to be told that, but, then, you’d also think a cop with a criminal record would get fired, not promoted:   https://marnietunay2.wordpress.com/2014/12/05/edmonton-police-service-and-mike-wasylyshens-promotion/

October 06, 2013:  I’ve just been reviewing what I wrote here, and I wish to add that, another thing bothering me about Dalla Lana v University of Alberta

in the ‘Memorandum of Judgment’ written by Madam Justice Patricia Rowbotham and and concurred in by Madam Justice Donna Read and the ‘Dissenting Memorandum of Judgment’ written by Mr. Justice Peter Martin , is the fact there’s no mention anywhere of a criminal complaint having been filed.  Now, if I was was raped – and s. 44 in the Appeal makes it clear that’s what we’re talking about:  “a sexual assault of a violent nature” – my first response is going to be to call the cops, not ‘security.’  Even if I called security next, the first call’s going to be to the cops.  See, now, the difference between the cops and ‘security’ is that the cops will send the complainant to a hospital for a rape test; whereas security can only advise the complainant to go to the cops, so that a rape test can be ordered.  Morever, there are very serious penalties for anyone who makes a false criminal complaint.  Instead, in Dalla Lana we have a woman who apparently, gauging by the judgment, doesn’t go to the cops and doesn’t produce any evidence of rape until three days later.  I think the Court of Appeal’s blithe dismissal of any problems with the ‘balance of probabilities’ standard of proof really smells, given what is produced in that appeal.   While the bad odor does not begin to approach those of the cases I discuss on my ‘Alberta Injustice’ page, (wherein Crazyboy makes a false statement regarding the trial judge’s assessment of “mitigating factors;” Shuchuk hands back to the tribunal the very same power that was taken away from it in a previous Court of Appeals decision, and the third, Husky Oil, decides that asking a bidder for confidential business information in front of its competitor constitutes a fair bidding process), nevertheless,  it certainly doesn’t leave me with the feeling that justice was clearly served….

UPDATE October 05, 2013:  Okay, I’ve found the case I was thinking of concerning the standard of proof in board hearing cases involving what amounts to allegations of criminal misconduct:  http://canlii.ca/en/ab/abca/doc/1999/1999abca125/1999abca125.html  In the case I discuss on this post, Dalla Lana v University of Alberta, the Alberta Court of Appeals sets out in s. 44 the standard of proof by which the appellant had been found guilty of what amounts to a sexual assault:   “The Board found on a balance of probabilities that the incident occurred as described by the complainant.”  s.44 immediately goes on to state that   “It found that her version of a sexual assault of a violent nature was supported by the physical examination by Dr Cave, who testified that the complainant’s perineum resembled a post-partum perineum.”  s. 44 does not, however, reiterate the finding set out in s. 42 that “[Dr. Cave] examined the complainant at the university health centre, three days after the alleged assault.”  [emphasis, mine].   Uh, for the record, I’m a woman, and I wouldn’t have convicted the guy of “non-consensual sex,” based on an examination done three days after the alleged assault.  And what the hell is that “non-consensual” label all about, anyway?  Sounds like an attempt to weasel out of calling a spade a spade, if you ask me, just so that the criminal standard of proof needn’t apply.  The guy’s gonna be tarred as a rapist; he should have had the right to a fair trial on the matter, in my opinion. But I digress.  Back to K.V. v. College of Physicians and Surgeons of the Province of Alberta, 1999 ABCA 125:  Although I remembered it wrong, and the majority judgment specifically rejects the appellant’s submission that the standard should be “strong, clear, cogent and convincing evidence.” [s. 33],  nevertheless, the Alberta Court of Appeals cites in s. 31 what it terms “the well-established standard of proof set out in Ringrose [Ringrose v. College of Physicians and Surgeons of Alberta (No. 2)]:” “although the onus of proof is not a criminal onus, that is, beyond a reasonable doubt, in cases of this type there must be a high preponderance of credible evidence.”  (emphasis, mine) Moreover, the dissenting opionion of the Honourable Mr. Justice Berger in K.V. states at the very end of the judgment, in (21) of his opinion that “The quality of the evidence is addressed but not the standard of proof. In a case such as this, merely requiring a greater weight of evidence to succeed on a simple balance of probabilities is an error of law. The council and the investigating committee should not have found that the allegations were true unless convinced by clear, cogent and compelling evidence.”  My personal opinion, based on what I can see from the Court of Appeal judgment, is that, while Stephen Dalla Lana may well have been guilty of what amounts to sexual assault (by a name that only serves to diminish his rights and not its effect on his reputation), it nevertheless appears to me that he may also have been 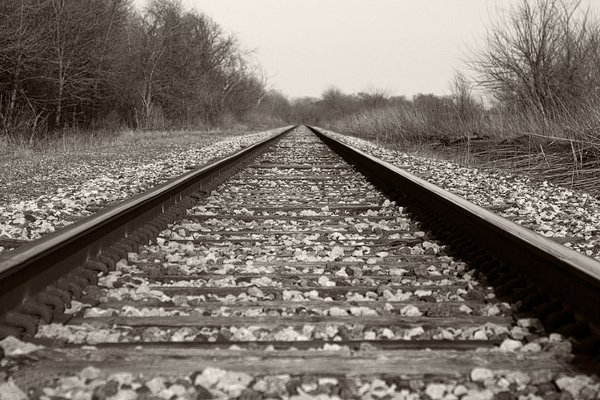 In short, although it is not, unlike the Court of Appeals cases I discuss on my ‘Alberta Injustice’ page, clear to me on the face of it that the judgment is unreasonable and unfair, nevertheless, I don’t like the ‘smell’ of it.

As an interesting aside:  the counsel for the appellant in K.V. was none other than Neil C. Wittman, Q.C., who became Chief Justice of the Alberta Court of Queen’s Bench in October of 2009.

On my page ‘Alberta Injustice,’ I’ve slammed a number of Alberta Court of Appeals rulings;   I’ve just been perusing a newly posted one, Dalla Lana v University of Alberta, 2013 ABCA 327.  Here is the new URL:

My problem  is not so much with the decision per se, but with the University of Alberta “Code of Student Behavior” section 30.6.5(7)  on which the Alberta Court of Appeals decision appears to be largely based.  That section of the code states, as quoted in clause [14] of the Court judgment:  ”

30.6.5(7) The UAB may accept any evidence that it, in its sole discretion, considers proper, whether admissible in a court of law or not; and it is not bound by the Alberta Evidence Act or the law of evidence applicable to judicial proceedings.”

That’s the part the appellant should have challenged from the beginning, based on what is given of his submissions in the Court judgment.  See, if that was a fair way to go about deciding if someone was raped or not, then the U.S. military would certainly have accepted it for the disposal of US fighter pilot Lt Col James Wilkerson’s rape case.  Because that’s pretty much the standard of evidence his commanding officer used to decide the case orginally:   “But in February, Lt General Craig Franklin, commander of the Third Air Force based at Ramstein in Germany, exercised his discretion under the Uniform Code on Military Justice and concluded, against the recommendation of his legal counsel, that the entire body of evidence was insufficient to meet the burden of proof beyond a reasonable doubt.

As the “convening authority”, Franklin was not required to provide further explanation for his ruling, although he later released a letter explaining he had based his decision in part on supporters who described Wilkerson as a “doting father and husband” who could not have committed such a crime.”  http://www.theguardian.com/world/2013/oct/03/fighter-pilot-centre-sex-assault-row-retire?INTCMP=ILCNETTXT3487

As the recent decision from Commander Michael Hostage, overturning Franklin’s decision to acquit Wilkerson shows, that low standard of evidence wasn’t good enough for a military tribunal either, beause it violates a fundamental principle of fairness.

And, come to think of it, the Alberta Court of Appeal has indicated in other reviews of administrative decisions that the standard of review for evidence pertaining to allegations of criminal acts is correctness, not reasonableness; and the standard of evidence should be higher than ‘on the grounds of probability.’  Hmm.  I will look those cases up in the next couple of days, when I have time, and post them here…