For some years now, I’ve been sitting on three treasures of Sufi literature, virtually unknown in the Western world, two of them by Sadreddin Konevi, also known as Sadr al-Din al-Qunawi, and the third compiled by several disciples of Ahmet Kayhan: 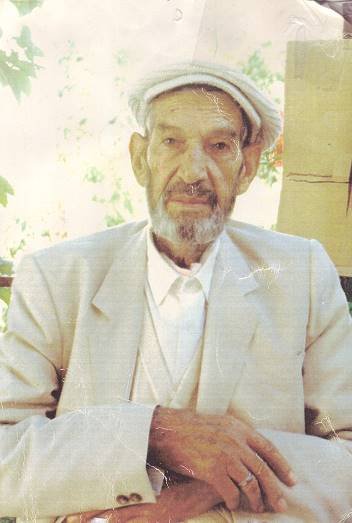 ……  all of whom I was acquainted with during my four years in Turkey in the ‘nineties.

The book, ‘The Beautiful Names of God and His Prophet,’ is an extraordinarily rich compilation of Sufi teachings on the Divine Attributes, from a veritable international ‘who’s who’ of great teachers, such as Muhyiddin Arabi, who was Sadreddin Konevi’s teacher and mentor, Abdülkadir Geylani, Bawa Muhyiddin, Hasan Lütfi Şuşud, and Jalāl ad-Dīn Muhammad Rūmī, among many others, compiled by my great friend Cahit Benövenli (may he rest in peace), his wife Gül, and Kayhan Berişler.  One contribution notably missing from ‘The Beautiful Names’ is that of Sadreddin Konevi’s own book on the Divine Attributes, (titled Esmâ-i Hüsnâ Şerhi in the Turkish edition).  The reason for that would be that the book was out of print at that time, and only came back into print several years ago.  My husband and daughter were going to visit his mother at that time, and one of his nephews made the mistake of phoning me specially to ask if there was anything I wanted from Turkey, as is the charming custom over there… ‘Well,’ I said, ‘as a matter of fact…”  The unfortunate man ended up making a special trip to far-away Konya to get me a copy of the book, which I am at present slowly working on translating into English.

As both a preparation for that work and as a project on its own merits, I am also now working on translating another work of Sadreddin Konevi’s into English, the ‘Hadis-i Erbain,’ the Forty Sacred Traditions.  According to the publisher’s introduction, Sadreddin Efendi chose the forty ‘sacred sayings’ from the Prophet Muhammed out of about seven hundred thousand possibilities, and provided his own commentary on those forty sayings.

I like Sadreddin Konevi’s way of writing, very terse and incisive, quite different from that of his chatty and, some might say, overly intellectualised teacher, Muhyiddin Arabi.  (I find the latter to be a huge snore, myself.)  It’s a difficult undertaking, however, to convey the terseness and power of the Turkish into an equivalent English, without losing either the accuracy or the lyricism of the Turkish.  I have four Turkish dictionaries, including a huge Redhouse dictionary of classical and archaic Turkish terms, and the big Oxford Turkish-English dictionaary, four Qurans and of course, there’s that handy-jim-dandy Turkish husband to patiently assist me with slang, ‘argo,’ and special meanings with which I’m not familiar and can’t find in the dictionaries.

Just to give you some idea of what’s involved in translating just one of the ‘Forty Sacred Traditions,’ I have selected as an example the thirty-ninth one, as it is intriguingly reminiscent of work I have done from a vastly different tradition and culture, (which you may see on my ‘Hrafnagaldur Odins’ page).

Now, a friend of mine had translated the first phrase of the Tradition as being:  “if you are confused in your affairs…”  However, there is no possessive ‘your’ in the Turkish:  “İşlerde şaşırırsanız…”  (see semazen net for the Turkish version:  http://www.semazen.net/w1/sp.php?id=246&page_id=1&menu_id=id2#  )  and I have learned both from being married to a Turk as well as from reading Turkish literature, that ‘confused’ isn’t really strong enough to convey ‘ şaşır.’  What’s more, my husband has advised me that the phrase has a strong special meaning: ‘if you’ve lost your way,’ and even to the point of ‘if you’ve gone astray (like a criminal)…’

My friend, an Englishman also married to a Turk, had begun translating the ‘Kırk Hadis’ (Forty Sacred Traditions) years ago, working with our friend Cahit Benövenli; several years ago, at my request, he finished the work they’d begun.   (He’d prefer not to have his name bruited about online, so I am not mentioning it here).

He was Cahit’s preferred back-up translator for English-speaking foreigners in Ankara who visited Ahmet Kayhan Efendi.  (Cahit’s own English, which he claimed to have taught himself, was as good as mine, (except for some slang), and that’s really saying something.)  So my English friend is no slouch in Turkish himself, and this underscores the challenges in translating even one deceptively simple-appearing phrase from the teachings of an Ottoman Sufi…

Here, then, is my translation, together with the Turkish, of the thirty-ninth ‘Sacred Tradition,’ and Sadreddin Konevi’s commentary on the same:

“Our Noble Prophet (peace be upon his name) has stated thus:  “If you have lost your way, ask for help from the dead.”

Now, the commentary for this tradition may or may not actually be Sadreddin Konevi’s.  One source:  ‘ The Muhyiddin Ibn ‘Arabi Society:’ http://www.ibnarabisociety.org/articles/sadr-al-din-qunawi-life.html  states that:  “(9) Sharh al-hadith al-arba’īn (Commentary upon 40 Prophetic sayings). This is the very last work and is unfinished, as it contains only 29 of the intended 40 hadith….”  And the ‘Society’s’ source for that is said to be:  “Sharh al-ahādith, MS Leiden OR. 920, fols. 2b–3a; Todd, ‘Writing in the Book’, p. 64. See the article by Stephen Hirtenstein in this volume, pp. 69–82.”  My English friend told me that the ‘Commentary‘ was probably prepared under Sadreddin Konevi’s supervision by students of his.  In any case, the ‘commentary’ for the thirty-ninth ‘Tradition’ is uncharacteristically brief, relative to that for the other traditions:

And here is my own translation of the same:  “You should know that, as a saint fully matures, the Lord, exalted in power and majesty, becomes a guest there, in the tomb of that saint’s heart.  This servant resembles the people of the graves.  If one who has gone astray in spiritual and material matters seeks help, it is the help of such an individual as has been described that he/she* would see.  And that individual would rescue the person in need from his/her* dire straits.  Understand this meaning, too.”

*Turkish does not differentiate between male and female in its pronouns.

My English friend translated the first sentence of the commentary as being:  “You should know that when the nurturing of the servant and friend of God is complete, God, Exalted and Majestic is He!, becomes a visitor to him.”  I declined to follow that reading for the following reasons:  1.)  The Turkish doesn’t actually say ‘a visitor to him.’  It says ‘a guest there.’  2.)  The fact that the Turkish doesn’t say ‘to him/her,’ when it very easily could have, suggests to me that the idea of ‘place’ is at least as important as the idea of ‘time’ in the sentence.  It suggests to me that what is being visited is not so much a person as a process.  3.)  Additionally, ‘yetişme’ basically means ‘(the act of) reaching maturity, growing up,’ which makes more sense, in my opinion, than to read the phrase as meaning ‘when (the act of) nurturing is finished.’  4.)  ‘konuk’ means ‘guest.’  Period.  If the commentator had wanted to say ‘ziyaretci,’ ‘visitor,’ there was nothing stopping him from doing so.  5.)  ‘Rabb’ is a very specific word for the Divine, meaning ‘Lord.’  I don’t know why my friend translated it as ‘God,’ which would be a translation for the word ‘Allah,’ not ‘Rabb.’

My friend translated the second part of the commentary as being:   “When a person who is in confusion regarding his worldly and religious affairs demands help, the Friend helps him.  And that Friend rescues him from the straits of his troubles.”  Again, I decline to follow that reading for the following reasons:  1.)  I’ve already discussed the meaning of the word ‘şaşır’ above.  2.) The first meanings of ‘yardım taleb et’ are ‘to ask,’ ‘to request,’ ‘to seek.’ help. The meaning ‘to demand’ in connection with ‘talep et’ is very specific to the field of economics.  Moreover, on the face of it, it seems to me to be rather unlikely that one is going to get any help without a wee drop or two of humility. I should think that ‘demanding’ help from someone who is more powerful than one is not likely to end well… 3.)  The word ‘zat‘ means ‘essence,’ individual (person)’, not ‘friend.’  The word ‘veli,’ saint, is often taken to mean ‘Friend,’ as in ‘friend of God,’ and God is often called ‘the Friend’ in Sufi literature, but the commentator applies neither of those concepts here.  He uses ‘zat,’ as in ‘individualised essence,’ which calls to my mind Gurdjieff teachings on the meaning of spiritual transformation as becoming what one truly is…  4.)  It’s very clear from the Turkish ‘anlatıldığı gibi bir zâttan,’ which means ‘the individual who has been described,’ that it is the saint just discussed who is going to help our ‘scapegrace.’  So it would have been very easy for the commentator to have used ‘veli’ again, if he’d wanted to emphasize at that point the quality of a ‘being a Friend,’ ‘being a friend to God…’

Anyone  who has seen my ‘Hrafnagaldur Odins’ page can sense an echo in this thirty-ninth ‘Tradition’ of something akin in terms of a spiritual search that ‘breaks all the rules…’  Only desperados need apply….

Ahmet Kayhan died in 1998, a few months after I got married and after my friend Cahit unexpectedly died, to my great sorrow.  Ahmet Dede (‘Grandfather Ahmet’) was greatly venerated in Turkey, and a small mosque was built next to the cemetary where he is buried, just outside of Ankara.  He was very good to me.  R.I.P. 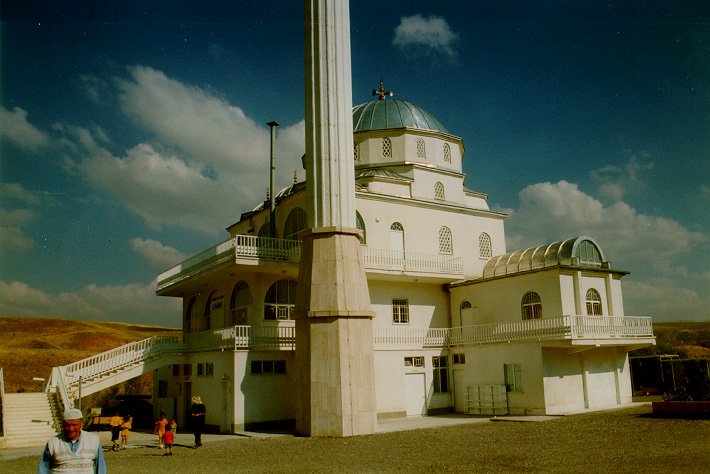 I'm not here much at the moment. You can visit my web-sites to learn more about me. https://marnietunay2.wordpress.com/
View all posts by Marnie Tunay →
This entry was posted in Uncategorized. Bookmark the permalink.